Calling it unethical, Speaker John Boehner prohibited Joe Walsh from accepting Glenn Beck's invitation to junket to Beck's "Restore Courage" rally in Israel next Wednesday. The House Ethics Committee rejected this use of taxpayer dollars as too political. Gee, ya think?

Of course, Joe sees it differently. Here's the video of Joe and Beck having a phone interview about the Ethics Committee decision yesterday live on Beck's new internet "TV show." It is not scintillating television -- Beck and his co-host do everything but fall asleep on camera -- but it is an interesting insight into the mind of a Congressman who won't support Medicare or Social Security, but sees nothing wrong with taxpayers sending him to Israel.

Of course not. He's going over there to support "God's work." Don't ya know, the Bible says that God needs 144,000 Jews to convert to Christianity and a rebuilt temple in Jerusalem in order for Armageddon to occur. Come on, despite appearances, Joe Walsh can't make the end of the world happen all by himself, but he can certainly do his part! And so can the American taxpayers. All we need to do is send him to Israel. Say -- that's a great idea. Maybe they'll keep him.

What do you call someone who welshes on his bills, doesn't pay his taxes, loses his driver's license, is a deadbeat dad and lectures others on fiscal responsibility? Congressman Joe Walsh, of course.

Here's Lawrence O'Donnell's take on the hypocrisy that is Joe Walsh:

And here's a bonus: all 82 pages of the documents Joe Walsh's ex-wife filed in December in an attempt to get Walsh to pay Years of back child-support payments ($117,000+) and other expense obligations (another $9K) plus attorneys fees. Good luck with that, Mrs. Walsh. But don't hold your breath.

That is the headline in the Chicago Sun Times this morning (7/28/11)
Laura, Joe's ex-wife is suing Congressman Walsh for $117,437.00 in back child support.  Of course we have due process in this country so we aren't going to say Joe is on the hook for this much, but if you read the article, he is on the hook for something.  The article goes on to back up the claims of Walsh's fiscal indiscretions that we knew about.
Many of us wish these types of infractions on personal integrity and core values had made bigger headlines in 2010.  Instead, Joe was able to find a band of merry-men to distract the public from the real issues and faux issues.
This morning the Tea Party and 912 Patriots have egg on their face.
Source: http://www.suntimes.com/6720892-417/tea-party-rep.-joe-walsh-sued-for-100000-in-child-support
Posted by LC Truth at 6:58 AM 2 comments:

Money for Education, but not in the U.S.A 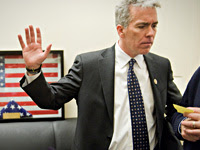 Not to long ago, as a matter of fact, a year ago, then Candidate Walsh was beating the drum for his Tea Party followers saying we need to abolish the EPA and the Department of Education.


Recently, a story released by Sam Stein of the Huffington Posts provides the reader with some insight regarding Freshman Republicans lobbying federal agencies for millions of dollars despite the drumbeat of out of control government spending.


Our or maybe your own Congressman Joe Walsh wrote the Department of Agriculture on February 14, asking for $7,498,015 in cash and commodities contributions for the American Nicaraguan Foundation and Fabretto Children’s Foundation — groups that run education, health and nutrition programs in Nicaragua.


Joe why is it ok to spend millions abroad for education, but not at home?
Posted by LC Truth at 6:37 PM 7 comments:

UPDATE: Joe is holding a "Cup of Joe with Joe," on Saturday June 18...guess where? In Antioch, in the new 14th District. Perfect record so far. No events outside the new 14th since the new maps were passed. Coincidence? We think not.

*********
Since the new Congressional maps were announced, we've been watching Joe Walsh's movements. He has marched in four parades (Wauconda, Lake Villa, Johnsburg, and, yesterday, Harvard) and had one Cup o Joe (Woodstock). What do those five locations have in common? Right. They are in the new 14th District.

QED: Joe Walsh wants to be the 14th district congressman.

Don't expect to see him much in the rest of the 8th District from now on. Good riddance.

Thanks, Joe Walsh.
You ARE Destroying Medicare. 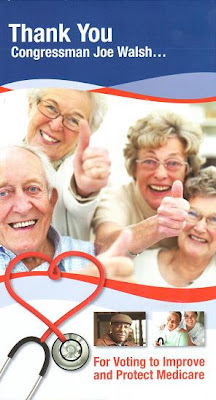 Many, um, older voters in the 8th District recently received this mailer about Joe Walsh. "Thank you. Congressman Joe Walsh," it says. "For Voting to Improve and Protect Medicare." Wha? Didn't he just vote for the Ryan Budget (HR3) that would give $6000 insurance vouchers to Medicare recipients in order to afford to give MORE tax cuts to the rich? Yes, he did.

So what could this possibly be? Another bill that will save Medicare from being destroyed? Hardly. Let's pick it apart, shall we?

1. "Thank you, Congressman Joe Walsh for voting to improve and protect Medicare." In Congressman Walsh's opinion, expressed at his town halls, Medicare is irretrievably broken so "something" must be done to "save it." Yes, HR3 will save the government money on Medicare. It will give seniors vouchers for approximately $6000 to go onto the private insurance market and replace their Medicare with insurance. This assumes that insurance companies want to insure people who are highly likely to become sick. Does Joe Walsh believe in the tooth fairy, too?

2. The smiling seniors in the photo are NOT voters in the 8th District, happily endorsing Joe Walsh. They are actors. The image can be purchased, for not very much money, from istockphoto.com. 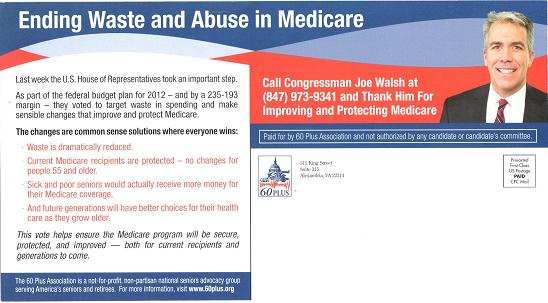 3. The back of the brochure, there is a headline: "Ending Waste and Abuse in Medicare." HR3 does nothing to accomplish this except promote shorter lives among seniors who can't get adequate (or any) medical coverage. Death panels, indeed.

4. Continuing down the list of "benefits" of HR3 (all posted in blood-red, no less):

"Waste is dramatically reduced."According to conservative site TheDaily.com, "Rep. Ryan wants to squeeze out such waste by turning Medicare from a defined benefit plan to a defined contribution plan. This means that instead of paying for a limitless array of medical services for every senior, as is the case now, the government will give seniors a fixed annual sum to use toward their health coverage. Stripped of doublespeak, that means sick people cost too much. When you run out of coverage, tough luck. It will save the government lots of money if you just die. So we can give tax breaks to the rich. (Also no mention of getting rid of actual waste like money that will now be spent fighting our insurance claims. Did you notice that?)

"Current Medicare recipients are protected -- no changes for people 55 and older." People 55 and older would have to be living in caves not to care about someone younger -- children, grandchildren, anyone? -- who would be hurt by this when they get older.

"Sick and poor seniors would actually receive more money for their Medicare coverage."
Yes, they'll get a bigger "insurance support" than healthier, wealthier seniors. But which group do you think insurance companies will run to give coverage to? One guess.

"And future generations will have better sources for their health care as they grow older." If you like being at the mercy of the insurance companies now, wait until you get old and sick!

And the real kicker: Paid for by 60 Plus Association...

What might 60 Plus be? They were founded in 1991 by right-wing direct mailer Richard Vigourie. And according to John Rother, executive vice president of AARP, an independent investigator hired by them found that 60 Plus is a corporate front group sponsored primarily by the pharmaceutical industry. What interest might big Pharma have in enacting Medicare "reform"? Oh, maybe the fact that Medicare limits the amount of money that can be spent on name brand drugs? Nah, that couldn't be it.

Thank you, Joe Walsh, for being on the side of big pharmaceutical companies and rich people who want tax breaks.

(We can't wait to dig into Joe's Federal Election Commission filings next quarter.)
Posted by olberwoman at 7:11 PM 18 comments:

The Evolution of a Town Hall

I had an email from an 8th District Constituent who attended the Schaumburg Town Hall this Week for Congressman Walsh.  As a matter of fact, this was his fourth Walsh Town Hall.  The below is a reprint of the email and goes to show that Joe is realizing his district is more than his band of merrimen.
"I'm XXXXX and I attended the Joe Walsh Town Hall meeting in Schaumburg last night. This was my fourth one. I attended his very first one in Lake Zurich in December even before he was sworn in. The second was at Harper College. the 3rd was in Deer Park. Last night's meeting was very different from the first two, in more ways than one. The first two were very similar to what I imagine would be a Walsh campaign rally. A real love fest, if you will. Last night was no love fest. He was challenged frequently, sharply, and rapidly when he would put something up on his "power point " presentation that just didn't ring true and was meant to mislead. Also, the crowd wasn't quite so one-sided. In fact, it was about half and half of those in attendance, but about 70 to 80% of the questions and remarks were not Walsh/Tea Party friendly at all. Mr. Walsh showed that he could adjust to the crowd and some of his views were different than the ones he espoused in the first two Town Halls I attended.
Example #1  In December, he said the "defense budget is untouchable, wouldn't cut a thing as long as there was even one uniformed U.S. service person stationed abroad." Last night, after a few challenges, he said the defense budget was on the table.
Example #2  I  guess he's heard enough about G.E. not paying taxes and the oil companies getting huge tax breaks, so he sounded like he was going after those also. However, he is of the 'drill baby drill' ilk and on this he has not changed.
As far as money in politics, he has backed off his December motto of "there should even be more money in politics' and now it's " my direct contributions are limited by law" (outlining many of the restrictions placed on direct contributions to candidates) but he unsuccessfully tried to downplay how corporation contributions to outside groups ARE unrestricted thanks to the Supreme Court's Citizens United decision. The crowd would not let him get away with this sly deception and let him know it. Those who pointed this out were applauded.
One last thing about the issues - his whole theme was the debt, the deficit, the debt, the deficit but the crowd had other issues in mind, especially the Ryan plan - which by the way, he said he didn't agree with everything in it but failed to say what.
Now for my analysis of Joe Walsh himself. I give him much credit for having all these Town Halls and listening to the voices of his constituents. Of course he pats himself on the back vigorously for this but he still deserves credit. Also, he makes the point that those elected to Congress should not necessarily be blamed for "trying out what they believe in." He's a terrific salesman and most of us would have a difficult time doing what he does, as far as the town halls. That being said, his policies are way out there and his Tea Party crowd's "solutions"  are even further "out there" as you can imagine. The ones I spoke with have terrible ideas about taxes and regulations and you'll never convince them otherwise. Fortunately, I think these people are a minority but they are his people, lock, stock, and barrel.
Posted by LC Truth at 7:01 AM 4 comments:

We have re-tooled and now are a watch-dog group monitoring the legislative activities of Congressman Joe Walsh (R IL-XX). It is our goal to put the Congressman's actions in a blog and let you carry on the pro/con discussions.